Republicans hate big government and they always prefer local control. Local control is always better, unless they are sending federal troops to Portland and Chicago, or trying to repeal Roe v Wade, or dismantling public schools in favor of charter schools, or in the latest case, housing. Before we discuss Trump’s latest attempt to distract and manipulate the American people, we need to understand the make-up of the voters who are available. This is going to include a little math, but it will all make sense.

White people represent 197 million people compared to 60 million Latinos and 44 million African Americans. Even if you combine Latinos and African-Americans you still have 104 million in that group compared to 197 million white Americans. We have to take a deeper dive if we are going to understand the political makeup of voter demographics.

Looking at the former, in the 2016 presidential election only 138 million Americans voted which is 58.1% of the eligible voting population. In simple terms of the 328 million Americans, 237 million are over the age of 18 and eligible to vote. That’s an additional 99 million eligible voters to engage.

The Trump strategy is based on these numbers and that’s why he continues to be so acrimonious and intransigent. His strategy is to suppress and disenfranchise minority voters while convincing some of the other 99 million to vote for him. This is a numbers game plain and simple.

With the numbers in hand all Trump has to do is find an issue that will galvanize a small percentage of those 99 million voters to turnout for him, and he has found it: law and order. Now the question is who to target? Trump is losing black, Latino, Senior, millennial, and traditional Republican voters. Who is most susceptible to his law and order scare tactic? Specifically he is targeting the suburbs. Why? In 2016 he won there against Hillary Clinton 49% to 45%. Today Biden is winning in the suburbs against Trump 60% to 35%.

So this latest tactic gives him a twofer: erase an Obama era rule and play to the race based fear in the suburbs. During Obama’s tenure, a rule was passed under the Department of Housing and Urban Development to introduce racial diversity into the suburbs. You need only read the comments in an article written on Fox news to understand Trump’s thinking. Trump supporters like Stanley Kurtz was quoted in another Fox news article using coded language like “local control”. It’s funny that conservatives always use phrases like local control until it comes to guns, religion, abortion, and others social issues.

And Trump’s favorite medium to disseminate his latest flights of fancy? Twitter of course. And Ben Carson was right there behind him. 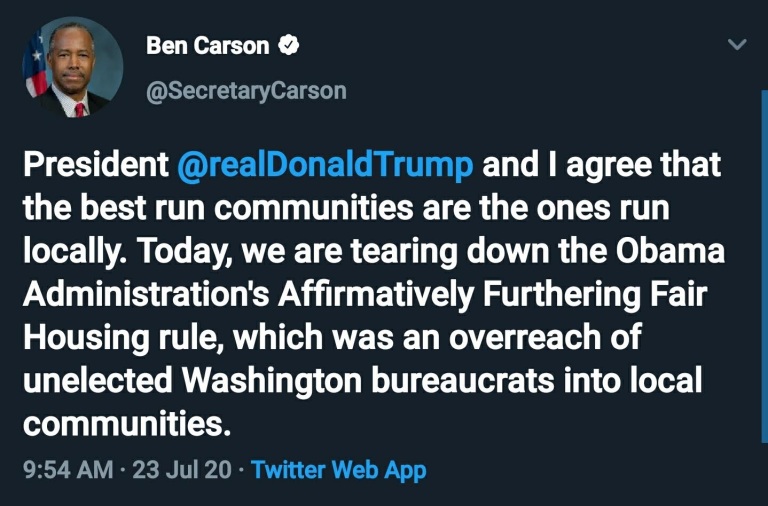 Trump continues the culture wars in 2020. His latest tweet was “suburban housewives” will vote for him because he has stopped the “invasion” of low income residents into their neighborhoods. Those suburban housewives can feel safe with Trump as president. 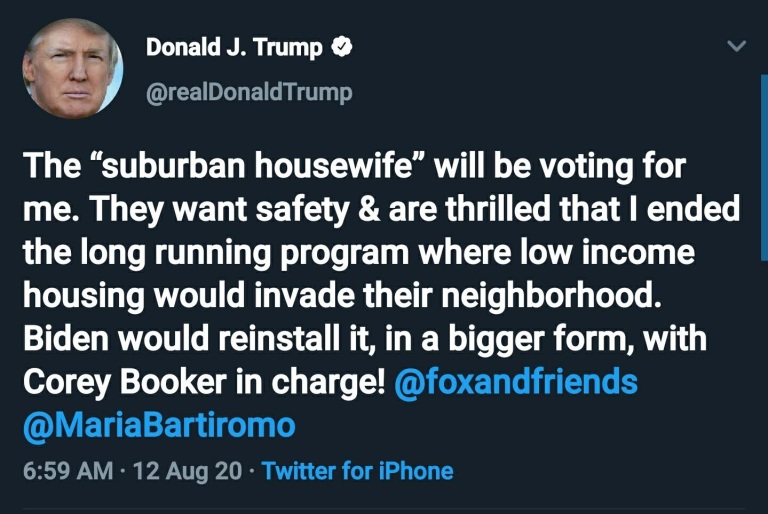 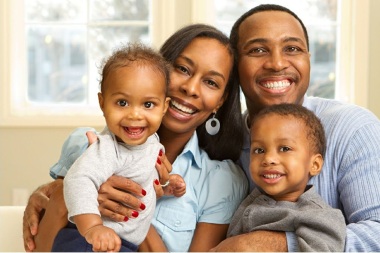 Can you tell which of the families above is low income? If you can, then you are who Trump is targeting and you are the problem.

One thought on “How Low Will Republicans Go?”