An Appetizer is usually a small serving of food — just a few bites — meant to be eaten before an entree, and often shared by several people. You can also call an appetizer an hors d’oeuvre. An appetizer is meant to stimulate your appetite, making you extra hungry for your meal. This is where the word comes from, literally meaning “something to whet the appetite” or “something to appetize.”

If you have been paying attention, you know that Twitter is Trump’s favorite social media medium. He absolutely loves to tweet his nonsense all day long. I don’t want to spend any time discussing his Twitter account in particular today because there is a much more nefarious Twitter account supporting his re-election and candidacy.

The Trump War Room on Twitter has removed any pretense about race being exploited this election cycle. It is obvious. It is brazen. It is 100% full on Willie Lynch circa 1980 racism. Here are some of the tweets from that account. 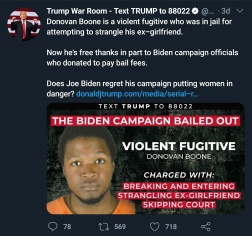 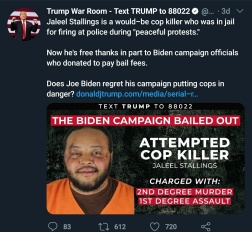 You will notice that the official campaign has not made these accusations against the Biden campaign. They haven’t officially made these accusations because they are not true. That doesn’t stop Trump and the far-right conservative movement. Truth is just an inconvenient speed bump along the path to their supposed victory in November. But that was just the appetizer.

If you pay attention to the dates on these tweets, you will notice that something else important happened later that day. So what was the purpose of “whetting everyone’s appetite” with images of African American criminals? What was the main course about to be served?

All those tweets in the appetizer were leading up to the main course: Kamala Harris with a twist – birtherism. Remember when Donald Trump said that he sent investigators to Hawaii to investigate Barack Obama’s birth certificate and he did not believe what they were finding? Yeah I didn’t believe it either. That old aphorism: fool me once shame on you is very applicable.

Trump and some of the more unscrupulous people in his orbit have gone back to the birtherism well. The accusation this time is that even though everyone knows and acknowledges Kamala Harris was born in California that somehow, because both of her parents were legal immigrants, that her citizenship is in question. Let me repeat that. Both of Kamala Harris’s parents were legal immigrants. Kamala Harris isn’t an anchor baby, a DACA recipient, or anything of the sort. Her citizenship is guaranteed by the 14th Amendment and by extension her eligibility for the position of vice president.

When Barack Obama, who was born in Hawaii, and Kamala Harris, who was born in California appeared at the top of national tickets for the first and second highest offices in the land, accusations about their eligibility were fomented by the same person and the same party. This is the reason why black participation is in single digits in the Republican Party. This is the reason why Donald Trump’s support among African-Americans specifically, and minorities generally, is as low as it is.

Trump can brag all day long about low unemployment among women, African Americans, Latinos, and Asians all day long. However, the vast majority of people are not going to trade their sense of self and community for a few more dollars in their paychecks. That is the one thing that the Republican Party has never understood. Furthermore, they will rue the day when poor and working-class white people finally realize they have more in common with their fellow Americans with similar socioeconomic status than they do rich and privileged elites who share their same  lack of melanin.

This will be served November 3, 2020. I know who I want to win and who is favored to win, but whoever wins (Biden/Harris or Trump/Pence) a plurality of the American electorate will celebrate. I predicted a blue tsunami this November and the addition of Kamala Harris to the Democratic ticket has made that crushing wall a few feet higher.